Hillary Gate Part III: From Benghazi to the White House? 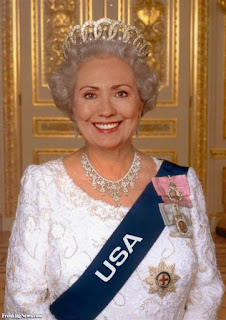 It seems to me that either most Americans have been totally brainwashed by the media or they have completely lost touch with reality due to the chemical additives in processed foods, and fluoride-laced toothpaste and fluoridated water. The privately-owned major media, controlled by just six separate corporations, get paid to tell you what their sponsors want them to say.

Since the Obama presidency, we have watched our relationships with many nations rapidly deteriorate into mere acknowledgement of our existence or no longer considered allied either by them or by our government. Most of the down slide began under Hillary Clinton's Department of State. I doubt that is coincidental.

In Hillary Gate Part I: Just the Facts, it seems that Dick Morris corrects several 'facts' about the Clintons that are most often spun into some positive yarn. In Hillary Gate Part II:  From Watergate to Benghazi, her professional career is explored from the people who knew her and worked with her or had to deal with her directly or indirectly through her various buffers.

Here is a video accounting of the criminality of the Clinton Cartel. There is some strong language used so I am asking you, the Esteemed Readers to exercise discretion when viewing in the presence of children.


It should be kept in mind that she and Bill both are members of the Council on Foreign Relations which is a foreign entity. We have clearly heard Mrs. Clinton denounce our rights as Americans and an adherence to the Constitution as she spouts a more global view. Sounds to me like legal-speak for one-world-government.

Does it seem like destiny?  Hillary violates federal law, the same law that others were prosecuted and found guilty of violating 'without proof of intent' who, innocently shared with one other person or took home to work on after hours, but the FBI will not recommend indictment against Hillary and the Department of Justice will not prosecute. This all magically happened right after an 'impromptu' meeting that took place between Hillary's husband and the Attorney General of the United States. It's now commonplace that the path to the White House is traveled by people who have no regard for existing laws or the safety of the American People.  Laws are for the common good. The current Administration, like the several past administrations, stage false flag events and instigate fear and paranoia See: Planned Paranoia:  The Fear of Firearms) in order to validate their agenda to disarm Americans.

The clear chain of command was non-existent during the disastrous Benghazi/CIA weapons delivery to Syrian/ISIS rebels and was replaced by a muddied National Command Authority assignment.  The State Department is a branch of the Executive Branch of Government, as also are the Federal Bureau of Investigation and the Department of Justice.  Should the Esteemed Readers believe that those who are entrusted with enforcing the law, upholding and defending the Constitution, will do so when one of their own breaks the law?


It has taken a small group approximately one hundred and sixty-six years to infiltrate and change the system of self governance into a Government with goals and an agenda that is completely foreign to the American way of thinking and acting. The current Federal Government applies Administrative Public Policy Statutes as though they were Laws, and the do so selectively. The Government has taken what was once clear straight forward American English words, laws, and concepts and subjected them to interpretation. The aftermath is a progressive set of self reinforcing rules which have no resemblance to the original laws or their meaning.

Like Obama, Hillary is a just another manifestation of how insidious and how deep-rooted this progressive mind set is within government. Americans have become the mindless uneducated zombie-like creatures in low budget apocalypse videos, and are unaware that this problem exists. a growing number of people over three generations have embraced change and progress as another mindless escape from reality. At this juncture the system in place is not functioning as it was intended to function, it is broken. It will make only a small difference if a real American manages to take presidential office. If some else assumes office, the situation can only worsen
at 12:52:00 PM