There is obviously a concerted effort by the government to suppress truth, and the mainstream media is their spin machine. Ron Paul predicted the economic crisis we all face now as far back as 1983. He didn't blame Clinton or Reagan or Bush.

No other Congressional Representative nor Presidential candidate has been so bold and honest in their assessment of the scope and depth of the issues we face. And only Ron Paul has steadfastly defended the rights of the States and of We the People as is expressed by our Constitution.

The rest of the GOP field seem like just more of the same hype and rhetoric that created the problems we now face. Only Ron Paul has correctly identified the usurpation of rights through the Federal Reserve System which is an unlawful act based on explicit Constitution directives to Congress, to coin currency as well as set the value of that currency.

The limitations of federal authority, have been grossly breached and misrepresented for many decades now, so much so, that the people feel that the government does have that authority based on citations by Congress and the Supreme Court, such as the commerce and necessary and proper clauses.

But using these limited powers to usurp the rest of the Constitution is a travesty, perpetuated by acts that do border treason. The very survival of the republic depends on what will happen in the 2012 elections.

Having Dr. Paul as our President will insure that no acts of Congress will be signed by the President that do not fall within the Constitution limits of federal government authority. But that in itself will not be enough to restore the republic to its intended form, nor will it produce the fiscal responsibility required to create a sound monetary policy, based on asset-backed currency.

So it is up to We the People to not only elect Ron Paul as our next President, but to also elect representatives to both Congressional houses, so that his Constitutional policies can be carried forth. 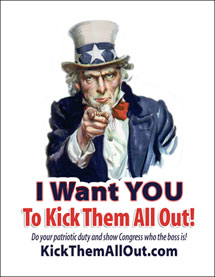 As patriotic Americans, it is not only our right, but our duty to remove from office, all members who will not obey their sworn oaths to defend and uphold the Constitution. When choosing your Representatives and Senators for the 2012 general election, the only criteria that is required, is that they uphold the Constitution and represent the needs and wants addressed by their constituents.

For your State primary: Register as Republican or if permitted by election rules, register Independent as get Ron Paul on the ballot.