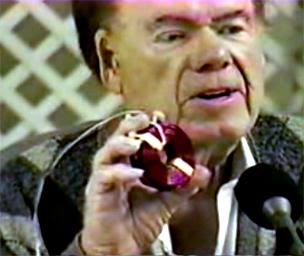 Ten years passed and Dr. Bob Beck happened to stumble over the mention of this technique. He devised a simple device instead of the complex and costly embodiment the patent holders had envisioned and devised, and without further complication, made the entire matter public. Technique, protocol, and an ancillary self treatment device, all of this at his own expense. The information contained in an Article entitled "Take Back Your Power" available at hundreds of internet websites will allow anyone to treat themselves for the complete eradication of bacterial, viral, and fungal infections, and all parasitic infestations over a period of two to four months. Herpes, AIDS, Pneumonia, Measles, Diphtheria, Smallpox, Anthrax, and whatever else you care to identify: are all curable. Or you can listen to the Cookie Cutters argue about how to solve the health care INSURANCE problem and make it profitable.