Willard Mittington Romney the wheeling dealing corporate raider has announced his foreign policy dream team of professionals. Not to mention the ugly truth in your face, the only real problem with this group of torture, murder, and terror oriented specialists, is their membership in the Council on Foreign Relations. This marks them as members of the Trilateral Commission and the Bilderberg Group, Just as it marks Hillary Clinton, Secretary of State  and the fraud occupying the presidency. I wonder if Americans are paying attention and becoming just a bit uneasy about the RNC's favorite son and for what he just might be preparing. 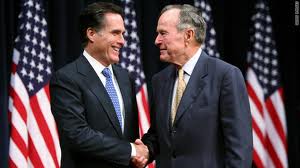 Now that Romney has shown that his teeth are much sharper and bigger than Bush's were and the American public has been conditioned to the 'forever war' for ten plus years, you should be able to see this shark for exactly what he is:  the next and possibly last phase, if he takes office, of the New World Order's plans for the destruction of America. Now you now why the kill order out of the White House only ordered action against Dr. Ron Paul and no one else. Obama, Romney, and Gingrich who would say anything to sway votes are on a team being run from the Bilderberg Group and higher.  What does any of this say about the motives of the RNC? 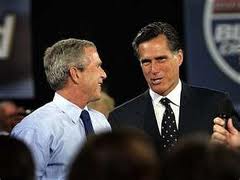 Generally, the team is quite neo-conservative, indicating the continuation of Bush’s foreign policy.

Ron Paul is the "only" 2012 presidential candidate who is not a member of the CFR.

Romney’s foreign policy views generally align with those of the Bush administration. He sees Islamic fundamentalists, or “jihadists,” as the most pressing threat to Israel/the United States. He has focused his foreign policy platform on doubling defense spending, forging “global networks of intelligence and domestic law enforcement,”

Late last week CFR member, and GOP presidential contender Mitt Romney released the names of his foreign policy and national security advisors just in time for his Friday address on America’s foreign policy. He effused over his selection:
"I am deeply honored to have the counsel of this extraordinary group of diplomats, experts and statesmen. Their remarkable experience, wisdom and depth of knowledge will be critical to ensuring that the 21st Century is another American Century".His campaign continues to be plagued with an increasing chorus of doubters about his conservative posture. His claim to have balanced the budget of Massachusetts without raising taxes was found to be false.

Critics note that the latest announcement by Romney of his advisors should finally put to rest any idea that he represents conservative or Tea Party values (whatever that is). Analysts note that it should be more than abundantly clear that Romney has little or no interest in deviating in the slightest from the foreign policy trajectory the country is currently on. If he does waver, he’ll have plenty of pressure from the elitists surrounding him to stay the path to building the U.S. empire abroad with America's blood and treasure. In his article entitled, “Obama Will Win If Republicans Pick Establishment Candidate,” author Gerald Celente said the Republican establishment is following “a suicidal strategy that’s stranger than fiction. It’s as though the Republican campaign has been devised by insidious Democratic infiltrators.”

He named the following people to his board of advisors:
Romney's Team Member's

1.Dov Zakheim - (Israeli Dual Citizen)CFR Member, Senior Advisor at the Center for Strategic and International Studies; Under Secretary of Defense (Comptroller) (2001-2004); Deputy Undersecretary of Defense for Planning and Resources (1985-1987).

2.Robert Kagan, a Neo-conservative (Israeli Dual Citizen) CFR Member, surprise!  Syndicated Columnist; Senior Fellow at the Brookings Institution in the Center on United States and Europe; Board Member of the Foreign Policy Initiative Chairman of the Chertoff Group; United States Secretary of Homeland Security (2005-2009); Judge on the United States Court of Appeals for the Third Circuit (2003-2005).

3.Cofer Black - Torture Specialist Born 1950, Stamford, CT, High school at Canterbury prep school, college at University of Southern California Master's of International Relations, USC, 1974. Joined CIA clandestine service in 1974, served 6 foreign tours, mostly in Africa. CIA station chief in Khartoum, Sudan, 1993-94, when bin Laden was there. Helped capture Carlos the Jackal. Director of CIA's Counter-terrorism Center (CTC), 1999-2001 After 9/11, "led the hunt" for Osama bin Laden, including at Tora Bora. State Department ambassador-at-large for Counterterrorism, 2002-04 Vice-chairman, Blackwater USA, 2005-present Principal, 2006-present, Complete Intelligence Solutions, a Blackwater spin-off providing security data and services for the private sector Advised Romney presidential campaign on national security issues, 2007-08. Cofer Black's role in the United States torture regime was threefold: he ran well-funded secret operations throughout Afghanistan and Pakistan as a CIA warlord; he oversaw our country's early development and implementation of "enhanced interrogation" techniques, renditions, black sites, and disappearances around the world; and he privatized murderous violence with Blackwater USA and other corporate ventures. Black's proposal for ungloving the CIA, which was approved by George Bush and CIA director George Tenet in a Memorandum of Understanding soon after 9/11, called for Black to lead a private, secret war in Afghanistan against the Taliban and Al Qaeda. He asked his agents to bring him the heads of al Qaida men "on sticks," and insisted publicly that they could only be stopped when "flies are walking on their eyeballs." Among Black's warlord-like responsibilities was "jointness"--cooperation with military officials to extend military operations into extralegal savagery, as when interrogating prisoners inside storage crates at Bagram Air Force Base near Kabul or hunting down bin Laden at Tora Bora. When Cofer Black later blamed the military for the Tora Bora fiasco--planting his accusations via a "deep background" story in the Washington Post--Donald Rumsfeld had him fired. Black implements SERE tortures, disappearances, renditions, Black Sites. Cofer Black systematized torture by enlisting psychologists Bruce Jessen and James Mitchell in a program to adapt SERE techniques--tortures used by Cold War-era regimes to elicit false confessions for propaganda--for detainee interrogation. Techniques eventually perfected at Guantanamo were evident early on in Black's Afghanistan. He also used CIA resources around the world to conduct disappearances and torturous interrogations at secret Black Sites, and he made liberal use of the practice of rendition, turning prisoners over to foreign governments willing to torture them. Black privatizes murder and torture and brings it into Republican politics. After being forced out of government, Black's adventures in torture and thuggery continued in the private sector. He helped lead Blackwater USA, a company accused of killing dozens of Iraqi civilians in association with taxpayer-funded security contracts. The company he founded with Blackwater money in 2006, Total Intelligence Solutions, extends his work beyond war zones to domestic venues, providing corporate security on the home front for American corporate leaders who seek information about and protection from enemies of all kinds. Republican presidentical candidate Mitt Romney sought out Black's services and counsel, naming him a national security adviser and attributing to him the notion that waterboarding should not publicly be labeled torture and doing so would hurt America.

11.Kent Lucken - (Israeli Dual Citizen) CFR Member,Co-Chair/Director at Citigroup Private Bank in Boston; where he provides global wealth management services to international entrepreneurs, private equity firms and several of the largest privately-held corporations in the U.S. Prior to joining Citigroup, Mr. Lucken worked at Robertson Stephens Investment Bank and he served fourteen years with the U.S. Department of State. Former Foreign Service Officer; Board Member for the US-Asia Institute.

I don't know about you, but dual citizenship is not ok with me for an ordinary citizen. But if you hold an official position that demands that you put American interests above all else -- if you should look transparent and fair to the rest of the world regarding your formation of Middle East foreign policies, then this is an absurd trend. Even if there were no pro-Israeli agenda, the fact that decision makers have a bias or an allegiance to one of the parties involved in the current conflict should have raised red flags long before now.

Ask yourself: How you would react to the Head of Homeland Security if he or she were a dual national with citizenship in Iran, Lebanon or Saudi Arabia? Ask yourself why you don't feel the same about Israeli dual citizenship. Then you will understand how powerful the Israeli lobby has been in "adjusting" your acceptance of their special status."