While most of the news is focused on the missing Malaysian flight 370, and the Russian Federation taking control in the Crimean region of Ukraine, we are being bombarded with rhetoric from our government about how Vladimir Putin is violating international law and the constitution of the Ukraine. 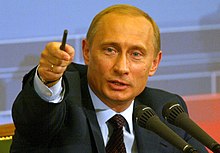 There are many mysteries to be uncovered regarding the missing plane, but very few regarding why Putin did what he did, and where he really stands. Yes, he is formerly Soviet KGB, and generally a pretty tough character. But his is neither arrogant nor stupid. Russia's Gasprom has vested interest in Crimea, and the Ukraine's economic problems have placed Russian interests in jeopardy. Ukraine was being swooned by NATO and the IMF, as allies and debtors to the banking cartel. And the fuels that flow through the Crimea were surely the only decent collateral that the Ukrainian government could offer for massive loans.

It really is hard for me to agree with my own representatives when they seem to think that I am dumb enough to buy the rhetoric of war mongers. I have not witnessed a war in my lifetime that was in direct defense of our liberty or our lands. What I have witnessed is a government that has systemically moved to a socialist oligarchy that these political pinheads have duped most Americans into believing is progress.

This isn't partisan war mongering. John McCain and now John Boehner have both publicly condemned Russia and support 'sanctions' against Russia. Russia is securing its pipeline and fuel resources from the banking cartel of the west. Good for him. But the 'free' press in American will not present that point of view. No, that doesn't fit in with the agenda of the globalist bankers.

As I was about to close down for the night and enjoy some music, I noticed a news article claiming that Barack Obama has issued yet another unconstitutional executive order claiming the right to seize the assets of anyone (including American citizens whether here or abroad) if he 'thinks' you may be supporting the Russians.

Well, I am an American, a patriot, and a liberty-loving, Constitution carrying member of no party, and I commend any president who has the intestinal fortitude to stand against the takeover of the natural resources and economy of a nation by placing it in debt to the IMF. Maybe Obama needs to give his Nobel Peace prize to Putin?

Perhaps we need an Icelandic revolt against the banks to get our economy back on track. Along with changes in Washington so we can get back to a constitutionally limited, representative republican system of governance. And stop being the police force for the globalists.

Now that I got that off my chest, I'll sleep better.