There is no denying that Newt Gingrich is articulate and well read, and that he is a formidable debate opponent. A Lincoln-Douglas debate would certainly be an advantage for the former Speaker of the House. With no teleprompter to aid him, Obama would not stand a chance in a head-to-head match with the Newt.


That does not mean that I want him as my President. He divorced his first wife soon after her bout with cancer and surgery. He cheated on his second wife with a House staff worker, 23 years his junior, and he also changed his faith from Lutheran to Southern Baptist and now he claims to be a devote Catholic. 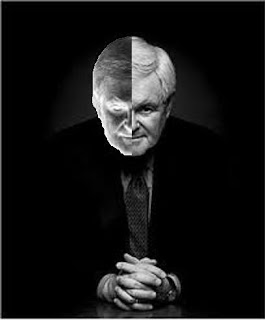 Just not too certain with wanting Newt Gingrich as a neighbor, because no telling whether he will be a friend or foe. I guess it would depend on how much profit he can get out of the relationship. He is founder or chair of American Solutions for Winning the Future, Center for Health Transformation, Gingrich Productions and Renewing American Leadership

He was sanctioned by the House Ethics Committee and paid $300,000.00 due to allegations and charges of "check kiting" and tax violations. Nancy Pelosi was on that ethics panel, the same Nancy Pelosi that shared a  couch with Mr. Gingrich when he was lobbying for legislation on global warming. I bet he would like that to go away now that he is looking to be President.

There is nothing that can be uncovered that would be any less damning than that which is already widely known about Newt Gingrich. While the privately-owned and controlled major media still pushes the party favorites, pitting Gingrich and Romney as the "front-runners" and even blaming the Tea Party Movement as the reason that there is so much division in the GOP, it is evident by the straw polls and the other polls that neither Gingrich nor Romney are gaining any ground except on one another.

Gingrich favored the individual mandate in 2005 when then First Lady Hillary Clinton was pitching a national health care agenda. Now he don't think that is a good idea. Well Mr. Gingrich, fellow House Republican Ron Paul said back then that it was unconstitutional but nobody paid much attention.


We the People are paying attention to Ron Paul and many more are joining to support Dr. Paul as our next President. And I don't care what Hannity and O'Reilly think, or any other "thumper" for the party faves.
at 10:51:00 AM