A Challenge to Voters

Tuesday March 6 is being called Super Tuesday. Big deal. Most Americans just follow the analysis they get from the privately-owned major media, who obviously are controlled by people that have a major stake in the outcome of the election. And yet, as if by cue after all is said and done, the voters prove by the tally that they vote the party favorite most of the the time. Which is to say, they vote what they are told is best regardless of what is true.

According to others, when it comes to military defense and foreign aid, something must be wrong with Dr. Paul's thinking; but, has anyone seen how much of the military actually supports him? The graph is real and says it all. Only Ron Paul stands alone in not supporting undeclared unilateral preemptive warfare, but instead, favors diplomacy and commerce. 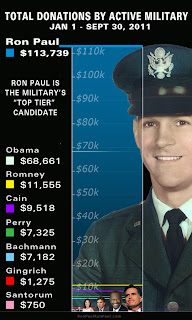 It would appear that when you actually see who the troops support, it is none other than Ron Paul! Now aren't you just a little surprised? I'm not. And that is because I have been listening to and following his spoken thoughts and his actions throughout the decades in Congress and while he worked around his medical practice. His dedication to the US Citizens is further demonstrated by keeping his oath of office to protect and defend the Constitution. His voting record in the House of Representatives proves that he truly practices what he preaches as a true conservative. He is a Statesman, the likes of which we have not seen in our lifetimes.

What is remarkable about Dr. Ron Paul is his ability to smile and laugh-off quite a bit of what his detractors say, while still maintaining his stand on the principles upon which our nation was formed. It is important to keep in mind that the reason the Constitution itself was written, was to allow the federal government a limited set of powers and those powers were to be divided into the three branches of government and keep them separated by a system of checks and balances. There were also very specific rules to establish the candidates and eventual choices for the Executive Branch.

If the security of the nation is at risk, as Dr. Paul says, there will have to be defenses in place to protect the American people which is a mandatory part of the national security requirement of government. But having military bases scattered all around the world, even in nations that are allies, is as Dr. Paul states, "Just plain wrong!"

All the other candidates from the GOP make Ron Paul out to be the one that is weak on defense. I lived through the war protests of the sixties; although, today's sentiments are similar, no one truly is willing to place the nation in harms way. The current furor has been whipped up and channeled through media spin and paid protesters. The Occupy Wall Street protesters and all the other occupy sit-ins that have been spawned from the media blitz are funded by the backers of continuous wars to gain profit.

So, lets summarize some of the solutions he stands by and then on to my challenge: Ron Paul is the only candidate who will cut the budget by $1 Trillion dollars in his first year in the White House. He will cut spending in areas that will have little or no impact on those that are on Social Security and Medicare and will return control of other welfare programs back to the states. He will defend America including its borders, but most of all, he will repair the economy starting with sound money that is based on asset values such as precious metals but not limited to just those.

So here is my challenge: To all the voters that will be choosing a candidate on Super Tuesday. I challenge you to make it a real Super Day by making Ron Paul the winner in all states, and really blow the media pundits out of the water. This proposed win for Dr. Ron Paul would be the best thing for all Americans that love life, liberty and the pursuit of happiness. 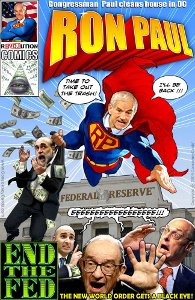 Send a message to the rest of the country this Tuesday and make a revolutionary stand for freedom.
at 11:02:00 PM