It doesn't take a PhD. in economics to see how much taxpayer revenue and borrowed funds are being wasted on "investments" in alternative energy projects. And while the President in busy with campaigning and finger pointing at the GOP-led House to pass another "stimulus" bill disguised as a jobs bill, there are several bills stacked up in the Democrat-controlled Senate that Harry Reid & Company have been ignoring. Several of them are budgets which will prevent another last-minute panic to push through a budget so that government won't be shut down. Sound familiar?

Now subpoenas are sent to the White House because the Administration is stonewalling and not providing information about the Solyndra scandal. The President however pokes at Congress passing a reaffirming resolution to keep "In God We Trust" as the national motto while his jobs bill gets no vote of confidence.

The biggest contributors to the Obama campaign are the same ones that received huge bailouts, many that pay no taxes (General Electric) and yet Obama says he wants the rich to pay their "fair share." The jobs in his "jobs bill" will create "thousands" of jobs in construction, bridges and highways, all union and all costing the taxpayers. The budgets thus far all have not cuts spending, instead they raised the credit limit (Can you do that with your bank or credit card company?) for themselves and spent more money that they had to borrow.

With the support of grassroots patriots, organized as the Tea Party Movement, the majority in the House shifted to the right, and gains were also made in the Senate, although short of the desired majority. But in a way, that is good for Americans who can plainly see (if they choose to) where the real problems are and with whom. They are not found in examining the sexual harassment allegations of Herman Cain, or the religious beliefs of Mitt Romney.

I can go down the list of the candidates vying for the GOP nomination and I am sure to find good things to say about each. But in all but one of them, we can discover past indiscretions, that even as isolated incidents, call into question their integrity and ability to serve the People and their Constitution.

There are many things that are going wrong in the United States, many issues that the government, the President cannot solve. The best thing for them to do is remove the barriers to free markets and lower taxes to stimulate business development. There are too many laws and department level regulations that inhibit business development and growth, moving innovation and jobs overseas along with revenue from profits. ARRA and TARP are but two prime examples of wasted spending and a burden to the American taxpayer. Guaranteed loans in excess of one half billion dollars to Solyndra is an exclamation point at the end of the phrase, "government waste and total ineptitude."

After listening and reading all of the so-called solutions that all these candidates are offering, and as we watch and listen to the debates and the analysis of those debates, one thing seems evident to me. Only Ron Paul is offering the tough and truthful answers to all of the questions, with the same consistency and persistence that We the People need and want in a President. A man who seems almost meek, but don't let that fool you, as he has been as tough as anyone in Congress that you will find. Not once can you find him changing his mind on issues, it is why the GOP and media resort to name-calling when they do have to acknowledge him. Mostly they just tend to ignore him.

We know that the major media will do whatever it is paid to do, regardless of how "fair and balanced" they profess to be. It is We the People that need to take back our liberty and choose our President, not from the rank and file party favorites, but from the Spirit of Liberty, the Constitution, Free Markets and Sound Money. 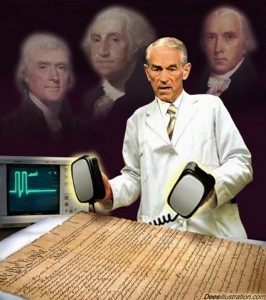