Democracy or Republic? Your Choice!

Parallels are being drawn in the media between the Tea Party Movement and the Occupy Wall Street mobs. So I thought I would do some research myself and see where these parallels are. What I find is quite contrary to what is portrayed by the privately-owned major media.

Where does the First Amendment end and public nuisance and disorderly conduct laws begin?  I cannot see where freedom to speak out has any bearing on defecating in public. Regardless of your opinions of the law enforcement department, those vehicles are paid for with tax dollars and not private investors funds.

Some of the banners are downright humorous. So long as the owner is cleaning up after his protesting canine, I see no problem here. But there are things that really are immoral and treasonous being done and I don't see the President or any Democrats speaking out. Most of them are praising these protests as the demonstration of democracy, the "American People" protesting against the "fat cats."

So tell me then how defacing the flag of America is a patriotic thing? Explain to me how this act demonstrates anything American? Because from where I sit this looks anti-American and that is without judgement about the person standing on our symbol of liberty. I would like one of those analysts or commentators to explain this action as anything else than what it truly is. 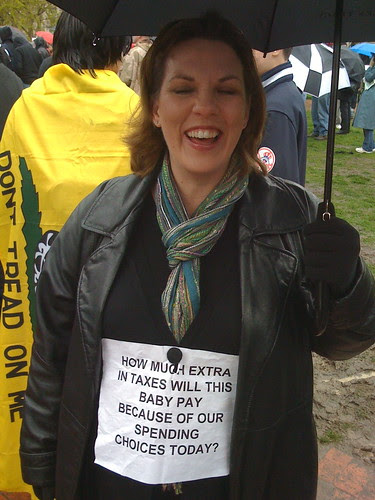 But they insist that these OWS protesters somehow have something in common with the Tea Party Movement protesters. Perhaps I am not aware of something that these analysts know?

So I went looking for Tea Party protests and found some interesting photos. In the very first photo I came upon, I saw a woman with an umbrella that had a sign on her abdomen.  She was protesting high taxes in Washington, D.C. not on Wall Street. The next photo I saw involved the U.S. flag. It demonstrates a contrast from the OWS protester that was standing on a flag. 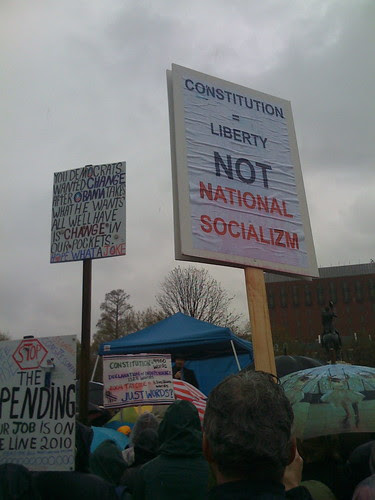 These Tea Party protesters were carrying signs that protested the President and Congress. This one was calling for liberty and Constitutional law.  Again, it is a contrast to OWS not a parallel at all.

Americans will have a choice with elections this month and again in 2012 when they must choose a President. These elections more than any others in this nation's history will be more important to the lives of every single individual that calls himself/herself "American." These election will determine whether we will restore the republic to a free and sovereign one, or will be surrender to the takeover and enslavement that economic collapse will produce

Like the Templar Knight said in the film, Indiana Jones: The Last Crusade, "Choose wisely!"
at 9:04:00 AM