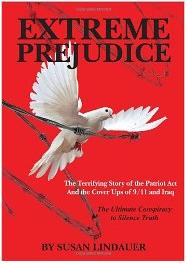 The CIA 'Asset' turned whistle blower, Susan Lindauer, has a new book 'EXTREME PREJUDICE' which relates the very real story behind the U.S. government's knowledge of the planned attack prior to 9/11 as early as July 2001. President Clinton had created a 'back channel of communication' for Susan to negotiate with Iraq. Iraq wanted peace, but because the administration could not reveal the origin of the 9/11 threat, the U.S. Declared war. However, the book outlines 'why' the U.S. preferred war over peace. The Middle East was experiencing 'peace' throughout this period leading up to the U.S./Iraq war. Susan outlines everything and it is very eye opening and very sad. I now have an extremely dim view of the U.S. government.

This woman was arrested under the PATRIOT ACT (which is becoming more common every day) after trying to warn of the 9/11 attack and was jailed for over a year on a military base without hearing or trial. The main reason the charges were dropped was the lack of any real evidence of wrongdoing on the part of Susan Lindauer, but more importantly, the fact that if any case had been tried in the required Federal District Court then the government ran the very real risk the court would most likely find the Patriot Act UNCONSTITUTIONAL.

Ten years later, after the damage has been done, she can finally speak. Susan also tried to warn the government of the 1993 World Trade Center attack but instead of appreciating her knowledge of it the government began to investigate her and attempt to terrorize her.

The type of material which holds any amount of truth is banned by mainstream media which is owned by one of the wealthiest families in the world, the Rockefellers. This is why you won't see the nightly news covering any of this material, but it must be known. Iraq offered the United States so much, even access to oil, and an agreement that they would buy millions of dollars in U.S. motor vehicles every year to support our economy...there is a long list.

Instead, the U.S. (Under Bush, Cheney, and Rumsfeld) chose war which devastated American families, the U.S. economy, the Canadian
economy and most tragically Iraqi families and the destruction of their country, so that the Military-Industrial-Complex could keep and grow their presence in an ever widening arena of influence and power. There is a whole economy in and of itself to weapons production and the U.S. military. This economy would not survive without constant warfare and most certainly not in a time of peace.

The Justice Department stopped recording the number of Iraqi civilian deaths due to sanctions. Children under the age of 5... well that number when last recorded was in the millions. Isn't that Genocide... of course it is.