Given by God and Taken by Government 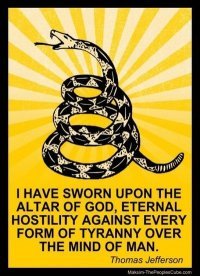 What God gives us the government wants to take away.  There is no reason for Americans to think that government grants you rights. Our Declaration of Independence makes that perfectly clear.

We are led to believe that laws that “protect” us from terrorists are in our best interests, even when they infringe on our rights. Nothing can be further from the truth. Our rights are unalienable and granted by our Creator, and unless we willingly or unwillingly give up those rights, by deception or force, no individual or group of individuals can take them from us.

While we can point to more recent usurpation(s) of constitutional law such as the Patriot Act and the National Defense Authorization Act as infringements on the rights of We the People, the beginnings trace further back into our nation’s history. Now we also have H. R. 347 which limits free speech.

With the passage of the unconstitutional Federal Reserve Act in 1913 and the subsequent laws of Franklin Delano Roosevelt’s New Deal, our liberty has slowly been taken away from us. By accepting the Social Security number assigned to each and every one of us, we have been reduced from a sovereign individual to a possession of the government. Even our births and marriages have been cataloged with a number assigned so that we may be tracked and taxed accordingly.

There was never a repeal of the apportioned taxing laws of the Constitution, only unlawful amendments that make it seem lawful. The issue is complicated by the fact that these unconstitutional laws are accepted by Americans by deception of corporate and contract laws that have corrupted the government structure itself.

There are no provisions in the Constitution for the government to control education. If was deemed necessary I am certain that our founders would have included such in the founding documents. There is no mention in all of those founding documents of “persons” because a “person” is a fictitious entity created under corporate law, instituted by the Uniform Commerce Code. These unconstitutional laws actually bypass the Constitution and create a corporate system that is based on Admiralty or Maritime Law, also known as the laws of the seas.

Our Constitution and the limits of federal government were based on natural law or the Law of Nations. There is an important distinction between these two very different forms of government. Further information may be found on a very good website called De-tax Canada which gives in-depth coverage to the methods employed by the powerful banking elites to control the world’s population through subversion and deceit. Every aspect of society has been infiltrated and corrupted by the bankers and their henchmen.

Now the government is making pacts or treaties with the United Nations to support the Small Arms Ban Treaty which is yet another infringement on the rights of Americans to own and bear arms. Don’t be fooled into thinking that this is just an Obama thing. This is being done regardless of which Democrat or Republican is in the White House and our representatives in Congress are just going along with it.

When will it end? It won’t end until either we are all subjects of a world government power structure or we revolt against these atrocities and take back our nation from the grips of those who seek to destroy the United States.

The real threat to America is not from Islamic terrorists; It’s from the people we entrusted with protecting us.