"When in the Course of human events, it becomes necessary for one people to dissolve the political bands which have connected them with another, and to assume among the powers of the earth, the separate and equal station to which the Laws of Nature and of Nature's God entitle them, a decent respect to the opinions of mankind requires that they should declare the causes which impel them to the separation."

Passed by the new Congress on July 4, 1776 by the Representatives of the Thirteen (former) British Colonies, the Declaration of Independence served as notice to a tyrannical King and an oppressiveness against the rights of free and sovereign individuals as prescribed in the second paragraph of that document:

"We hold these truths to be self-evident, that all men are created equal, that they are endowed by their Creator with certain unalienable Rights, that among these are Life, Liberty and the pursuit of Happiness.--That to secure these rights, Governments are instituted among Men, deriving their just powers from the consent of the governed, --That whenever any Form of Government becomes destructive of these ends, it is the Right of the People to alter or to abolish it, and to institute new Government, laying its foundation on such principles and organizing its powers in such form, as to them shall seem most likely to effect their Safety and Happiness."

Rights and duties and not obligations and permissions. When one is free and sovereign, there is only voluntary allegiance and not forced submission. We have come a long way from that premise in the past 236 years.

From before the ink had dried on the Treaty of Paris, conspiracy and plots had already been formed to remove the liberties fought for and return the lands to the Crown. When the Constitution was presented to the representatives of the original thirteen States, it was not to be ratified until a number of rights were included explicitly, as notice to this newly formed national government that the States and its sovereign People retained the liberty they fought and shed blood to obtain. 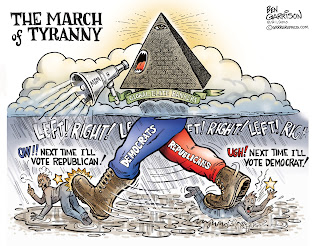 In many ways, the war for liberty never ended. It was the bankers and not the Crown who really wanted control, and the Crown was merely a puppet front to conceal the true identity of those who sought control. It remains the same threat today as it did then.

We now face a divided America, not unlike the division that produced the Civil War, where many American lives were lost because of the influence of the banking cartel. History has been obscured by these same criminals, hiding the facts from the masses. It was always the "Money Masters" who influence wars and who profited regardless of who were the victors.

With the beginning of a second term for a President who, has proven to be a most formidable foe to the rule of (Constitutional) law, the free and sovereign individuals remain divided as to what course they will pursue to effectively restore this once great nation to its former heights of liberty and prosperity.

While there are many issues facing the States and the People, none is more relevant than restoration of constitutional law. The corporate laws that have replaced or suppressed the Constitution must be abolished along with the central banking cartel we know as the Federal Reserve System and its criminal strong-arm collection bureau called the Internal Revenue Service.

We witnessed in this past election how the "powers-that-be" will stop at nothing to insure their own complete takeover of the government and the People.What to do, what to do?

Will we remain slaves or will we fight back for our liberties? Will it be a peaceful revolt or a bloody one?