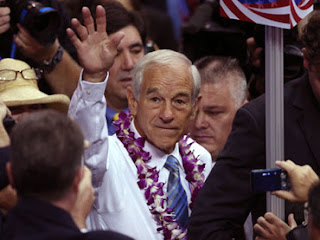 Before the final totals were in, the sore losing Republican Party was already blaming Ron Paul supporters for their loss. Having cheated Dr. Paul out of the nomination by every devious method possible, having denied him the opportunity to be a keynote speaker at the Republican National Convention in Tampa, they had the audacity and gall to ask Ron Paul supporters to throw themselves under the Romney bus.

Just as they accused Barack Obama for blaming all of his problems on George W. Bush, the GOP is taking the same path of blaming others for their own blunders. When Tea Party endorsed running mate Paul Ryan promised fiscal responsibility and no debt ceiling increase, he reneged and voted for it anyway. At least he was as consistent a flip-flopping liar as Romney.

Early on during the debates, Rush Limbaugh mentioned that to win the Presidency, the candidates had to sway the 30% of independent and non-partisan voters. In other words, the majority of  the Tea Party folks. I can't see how they would back Romney/Ryan after the double-crossing Ryan gave them. These are Americans who are not lock stepping with any party agenda. These are the young and educated voters, who know better than to by the propaganda slime of the privately-owned major media.

So who will the Republican Party choose as it's next victim? More relevant is the question, "When will American voters realize that the two party system is an illusion and that it never represents the interests of  the People? Will it happen before the collapse of the USA or will this nation struggle and endure another four years of constitutional deterioration and fiscal irresponsibility?

Will more States nullify the Affordable Patient Protection Act and stand by their own legalization of cannabis in the face of federal threats? Or will they capitulate in fear of losing federal funding for their local law enforcement budgets?

And who will they blame when foreign troops under the United Nations flag begin to deploy on American soil to quash "civil unrest" and maintain order when the people begin to rebel against the tyranny that has become the federal government?
at 12:05:00 PM